Guild Wars 2 : Heart of Thorns was reviewed on PC 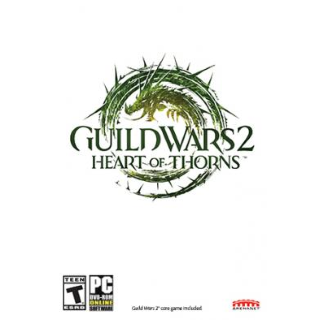 #HeartOfThorns Best MMO out there. The Gliding & the Guild Halls are amazing. Better storytelling, but main story glosses over some interesting aspects as you "fly through" it. Great time/loot sinks. Mastery system gives your account the feeling of levelling.
Must Play

I played: Far too long

In line with what Arena Net have always managed to make, the maps for Heart of Thorns look fabulously gorgeous. The vertical design makes these maps really big (4 layers in the Tangled Depths). Foes are appropriately hard to combat, and the different classes seem to be finding their place in the game.

The maps can seem very confusing and frustrating at first: you see events you want to participate in, but have no idea how to get to them. This becomes especially evident in Tangled Depths, where, as before mentioned, everything happens on four different levels. The two-dimensional minimap is understandibly not able to keep up here.
There are easier ways to navigate than simply running from event to event, but this “easy navigation” is gated by masteries; Gliding, Mushroom Jumping, Exalted Markings, Nuhoch Wallows, which all take time to unlock.

Guild Halls are amazing. Huge and very good fun, they add another much missed element from the original Guild Wars to its successor. The Guild Halls are relatively barren to begin with, but upgrades are available for you to purchase through materials and money. You will be greeted by Gamli Adelsteinsson, who will constantly inform you that he’s the guy with the beer. This becomes annoying very quickly, but it will motivate you to acquire the tavern upgrade fast, if nothing else just to shut him up. Win-win I guess.  Upgrading the guild halls gives the players another objective for the guilds, and has the potential to allow players to contribute to their guilds in ways that aren’t related to dungeons, missions and so forth. This is especially nice for intermittant players.

Guild Hall upgrades are a fantastic loot sink – a place to put all those materials you just don’t know what else to do with, but issues with balancing of some of the required items makes it an imperfect system. The idea of using the upgrades in this capacity is a great one however, and it’s easy to see the potential for the game developers to control any future surplus of ingame items through this mechanic (sorely needed, inventories just keep clogging up with stuff you have no idea what to do with).

Both Guild Halls are truly magnificent, and the screen shots do not do them justice. My advice: Go see, explore, enjoy yourself, and be marvelled.

A few patches in, the game has evolved and changed quite a lot. For instance the patches have changed a few things that was making it hard to get your Elite Specializations.

If you are interested in visiting a guild hall, you can message papasmurf.8760 or mgr.6157 in game (whisper or mail) for a guild invite.